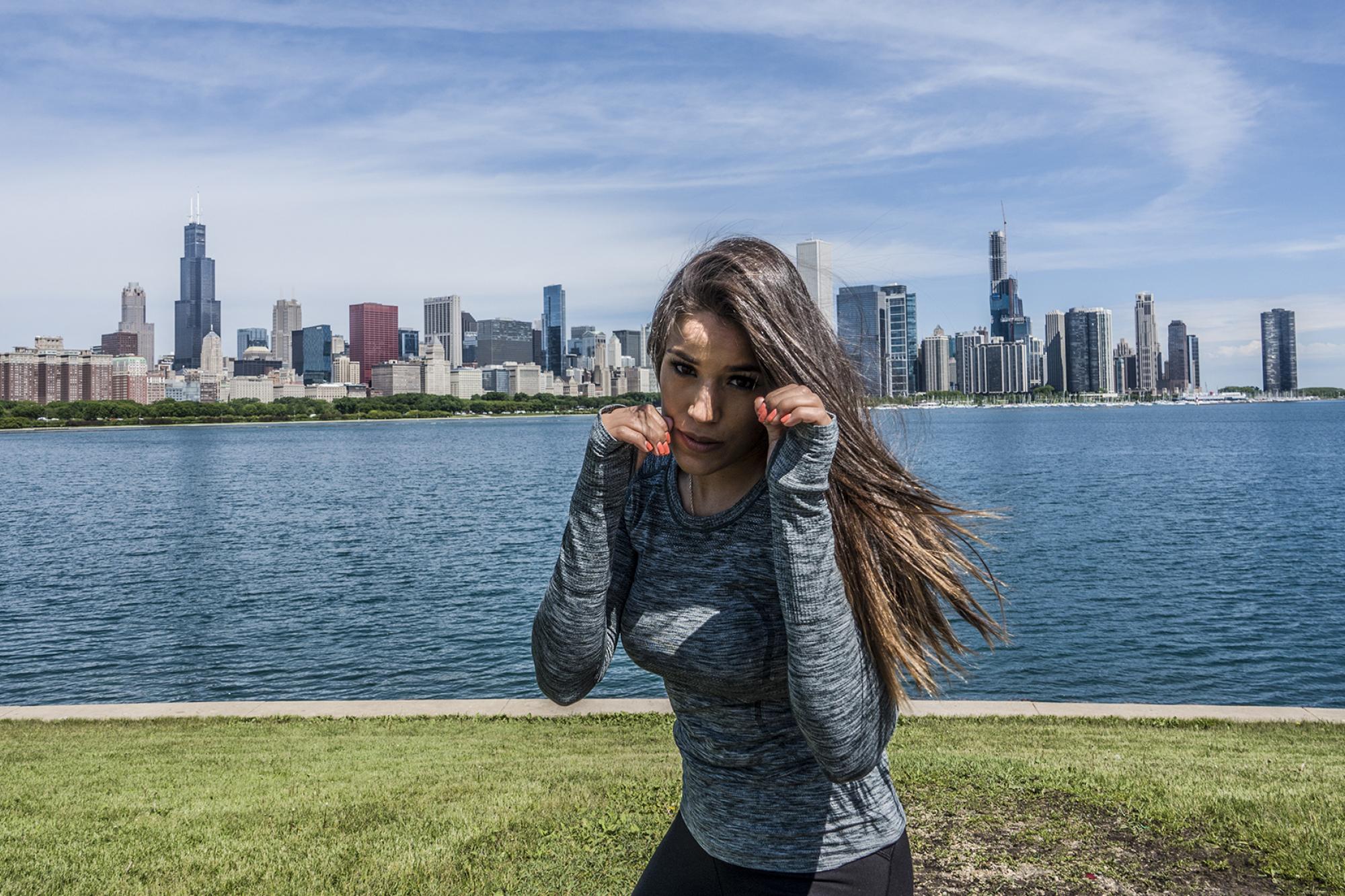 Bantamweight Eyes The Title With A Win Against GDR On Fight Island
By Steve Latrell, on Twitter: @TheUFSteve • Sep. 30, 2020

There’s an old saying that the apple doesn’t fall far from the tree, and Julianna Peña experienced it up close. Upon putting her daughter Isabella to bed recently, she found herself on the receiving end of some hammer fists.

“The other day, my last practice was a ground-and-pound drill. Normally she stays on the side—inside the Octagon—she’ll watch her little videos. When I got done with my practice, my coaches were like ‘She was watching you the entire time.’ She was watching you hammer fist that guy.’”

So I guess it’s never too soon to learn the family business?

“She definitely knows what I do…I don’t know if that’s a good thing that she’s watching me at this age—she’s only two-and-a-half—but I just know that I could talk to her all day long and give her advice all day long, but I want to be able to set an example for her instead and let her follow my example. I think it’s very important for her to see what Mommy does. Mommy is a fighter, and she knows that.” 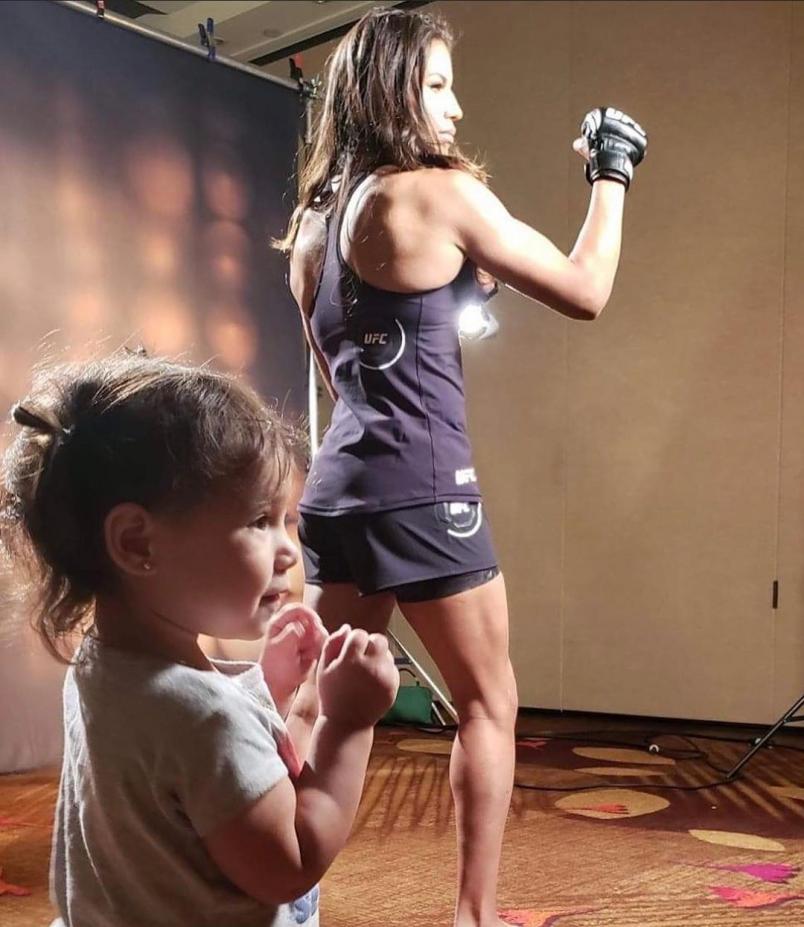 Julianna Pena and daughter, from her Instagram page @venezuelanvixen

Watch It All On ESPN+

Mommy is indeed a fighter, and an excellent one at that. Despite a series of injuries that have kept her out of action for extended periods, she perennially ranks among the elite bantamweights, and with her main card bout this Saturday against Germain de Randamie at UFC Fight Island 4, she finds herself in striking distance of that title shot that will tie a life’s work all together.

A glance at Peña’s resume makes it hard to disagree. The lone UFC loss she speaks of is to current flyweight champ Valentina Shevchenko, while owning notable wins over the likes of Jessica Eye, Cat Zingano and former flyweight champ Nicco Montano. In Peña’s mind, a win over “The Iron Lady” would erase any doubts.

“As far as future opponents go, I’m looking right now at Germaine de Randamie as the biggest challenge that I’ve ever had in my fighting career. Once I get past that, then it’s definitely Amanda [Nunes] for me, and I don’t see anything else other than that.

“Germaine de Randamie is an excellent fighter. She’s a former world champion and she’s a tough opponent. She’s very tall, she’s lanky, and she uses her reach very well. The fans expect her to want to stay up on her feet to save her life, and for me to try to get her down and ground her out into mashed potatoes. I think it’s the classic striker vs grappler matchup that the fans are going to be expecting.”

RELATED: Germaine de Randamie Has A Point To Prove

If she can execute that game plan, it will reward nearly seven years of commitment and particularly patience. Since becoming the first woman to win The Ultimate Fighter in 2013, motherhood and a rash of untimely injuries have kept Peña’s cadence to an average of a fight per year. But far from being discouraged, Peña is reflective and pragmatic.

“Injuries are a part of the sport…you get injured, you heal, and you come back and get ready to fight again. That’s just the nature of the beast.

“It would be nice to fight three or four times a year,” she continues. “But I know this sport is brutal on the body, so you’ve just got to make sure that you’re healthy. In a dream world, I’d be fighting three to four times a year, and that would be nice, but it’s not the reality of the situation, especially being up in the Top 5—and always being up in the Top 5 in my career—there’s only so many people that you can fight and leap frog." 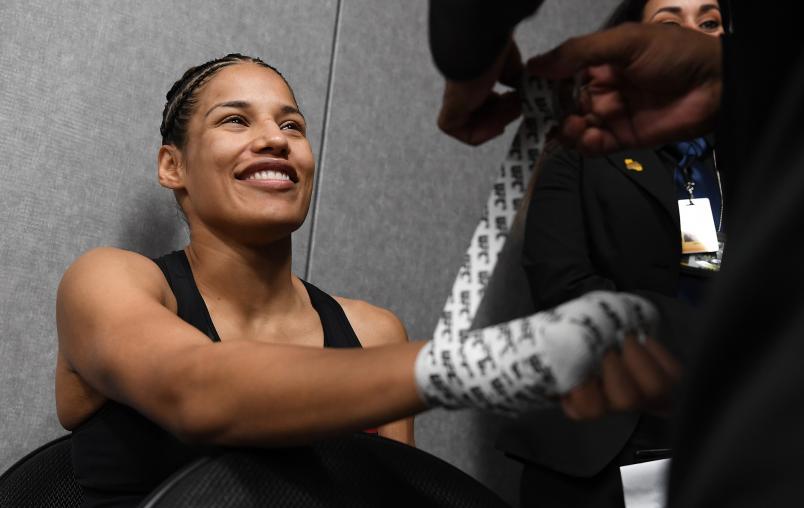 Pena has her hands wrapped prior to her bout on July 13, 2019 in Sacramento, CA (Photo by Mike Roach/Zuffa LLC)

Still, she recognizes the importance of activity, and hopes Saturday is the start of a faster pace.

“You have to stay in the viewers’ eyes. You have to be out there and you have to make them remember you. If you don’t fight in over two years, they don’t even remember who you are anymore. So I think it’s very important to continue to build my legacy and take as many fights as possible.”

She’s managed to remain in the viewers’ eyes, if not always as a fighter. 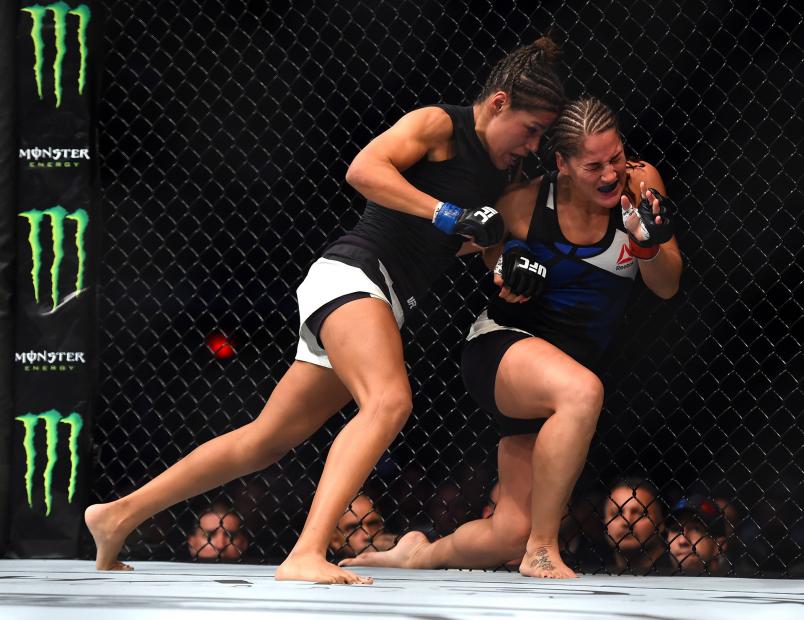 Pena punches Jessica Eye in their women's bantamweight bout during the UFC 192 event on Oct. 3, 2015 in Houston, TX (Photo by Jeff Bottari/Zuffa LLC)

“One of the things I love about MMA is that it has completely engulfed my life. Whether I’ve helped set up matchups, where I’ve reffed, and then commentating [for Combate Americas]. All of these things combined has helped me be a better fighter, just from looking at it from an outside view, and I definitely think that watching all those fights is a joy, it’s an honor. I love watching fights. I could talk about MMA to a rock or whoever will listen. So it’s something very fun. I enjoy it a lot.”

But of course, what she really enjoys happens inside the Octagon, and Peña palpably radiates the awareness that her dream is within reach.