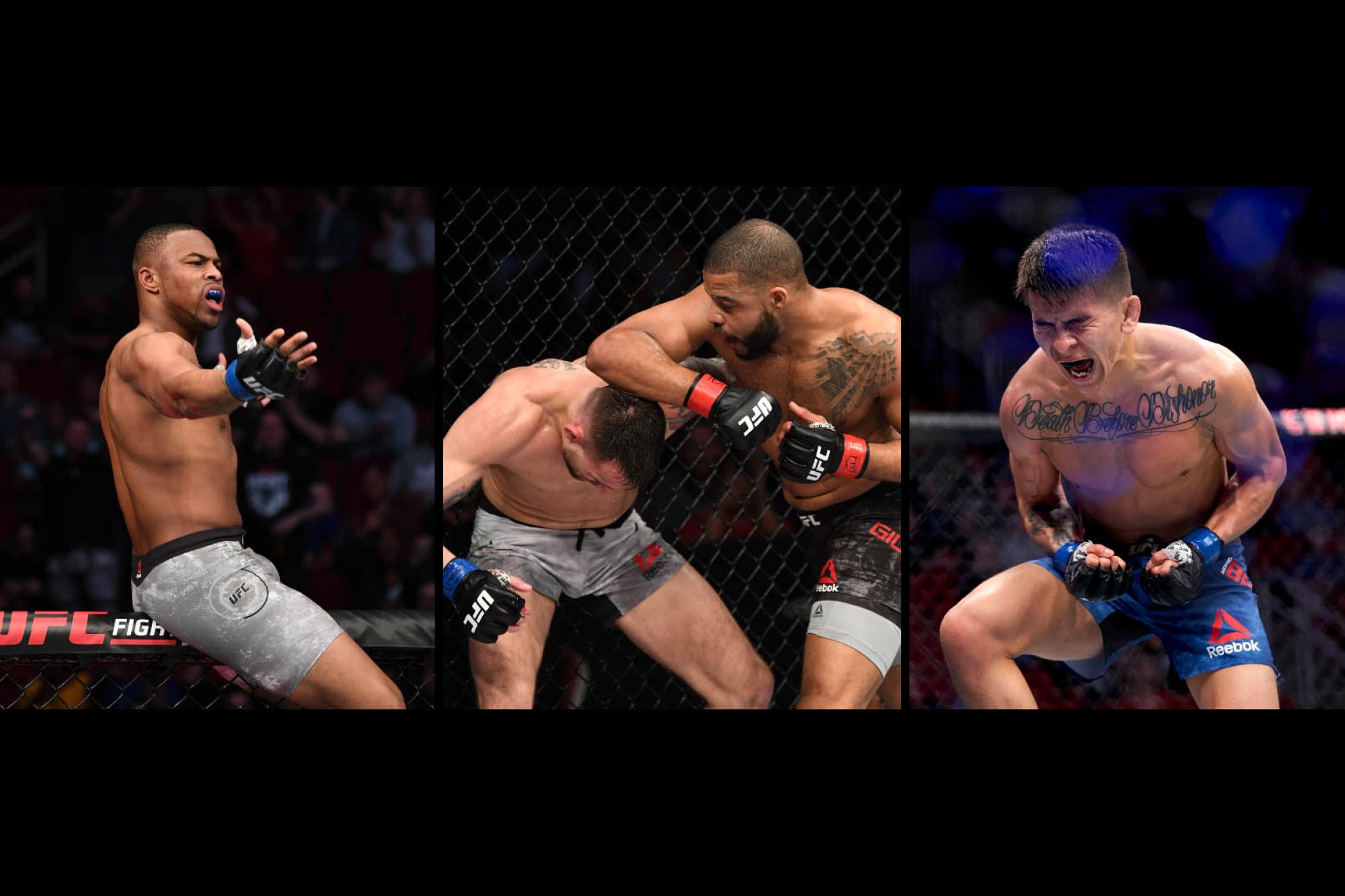 Trevin Giles talks about his split decision victory over James Krause at UFC 247.

On Friday afternoon there were doubts that Trevin Giles would be able to perform for his hometown. Giles’ original opponent, Antonio Arroyo, was forced to withdraw and in stepped James Krause. Now, just 24 or so hours later, Giles has a victory and a $50k bonus.

Giles overcame adversity early as Krause tried to lock in a submission for much of the first round. The final two rounds were all Giles, as he landed a flurry of powerful hooks. Krause was able to withstand the blows and result was a third-round war.

Giles was ecstatic to get a win in front of his hometown fans. But it was also important for him to right the ship – after an 11-0 start, Giles had dropped his last two bouts. The win halted Krause’s six-fight win streak – even though it was at middleweight and not at welterweight, where he usually competes.

Mario Bautista is 2-for-2 in earning performance bonuses in his last two fights. After dropping his UFC debut, Bautista delivered an instant classic against Jinsoo Son last July. It was a performance that’d be hard to top but Bautista did just that at UFC 247. In an event packed with thrilling fights and finishes, Bautista’s flying knee stood out.

“We watched his past fights," Bautista explained. "He is a lot shorter than me, kind of hangs his head in the center, doesn’t really move off line. Working with my striking coach back at home, we do that flying knee all the time, so it was something that we had seen and it worked."

The chips were stacked against Khaos Williams. He accepted the fight on short notice against Alex Morono - a longtime UFC vet who has won three in a row – and was the biggest underdog of any UFC 247 matchup sans the title fights. Williams didn’t care. He knocked out Morono in 27 seconds.

"I just want to thank the UFC for giving me this opportunity, I took it on two-week notice. The dude was a hometown guy, 17-5, so it was a pretty incredible win, I’m just blessed to be here, blessed to get the W how I did. Like I said, Khaos Williams, get used to the name, I’ll be here and I’m here to stay. I’m the future and one day I’ll be fighting for the title."

Jon Jones' title fight matchup against Dominick Reyes delivered more than most could have predicted. The bad blood between Jones and Reyes in the pre-fight buildup seemed bigger than any of Jones’ recent title defenses, and inside the Octagon, Reyes also appeared to be Jones’ biggest threat since the Daniel Cormier days. That ended up being the case, as Reyes aggressively threw his patented left hand from the moment the bell rang in the first round.

The pace was relentless and the fight seemingly flew by. By its end, there was no clear winner. Jones ultimately retained his belt with a unanimous decision victory and in doing so he passed Georges St-Pierre for all-time UFC title fight victories.

The two-year anniversary of Valentina Shevchenko’s return to 125 pounds was this week. Shevchenko has dominated ever since, notching four title fight wins. The latest was Saturday, in what may have been her best performance yet.

It was a clinic and she was able to TKO Katlyn Chookagian in Round 3. Shevchenko has looked progressively better each fight and there’s no sign of her reign coming to an end anytime soon. Some worthy challengers in the flyweight ranks still remain but a superfight with the double champ, Amanda Nunes, is something Shevchenko knows is inevitable.